An ok relic of a bad pitcher 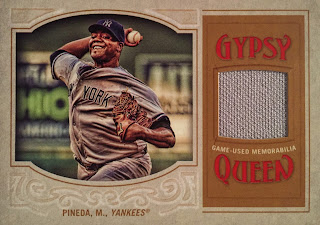 Sadly, that bad pitcher mentioned in the title is Michael Pineda, one of my PC guys.

Man, this guy just oozes with potential, but can't put it all together for whatever reason. He shows glimpses, and he was awesome in 2014, very good for the start of 2015, and since then, very, very bad. Notably, he's getting creamed in the first inning. Opponents are hitting .500 with 5 HRs off him in the first inning alone. That is...bad.

I still think with a good start or two he can turn it around, but he's he's definitely lost right now. His command just isn't there. He's already walked 13 guys, which may not seem like much, but he only walked 21 guys in 160 innings last year, and just 7 in 76 innings the year before. He's a guy that usually commands the plate, but he hasn't been himself.

I just keep waiting for that one start where he goes out and dominates and rolls from there. It could happen!

In the meantime, his stock is super low, which let's me pick up cards like the 2016 Gypsy Queen relic above for very cheap. This ran me like $1.50 shipped. There are still adorable sellers out there who think he is an ace and prices his cards like he is Clayton Kershaw, but I like the ones who start low thinking it's going to be a bidding war, yet I am the only pathetic, lonely bidder.

The design of these GQ relics are ok. Not a bad sized photo and the swatch works well within it's owm little box. Not the best, nor the worst relic card you'll see this year.
Posted by The Lost Collector at 9:49 PM