Whoa! A TTM success. This is a rare occurrence around these parts. My TTM requests seem to go in waves, as sometimes I am super motivated and sometimes I'm not. Well, I have been motivated lately, and have sent out a bunch.

I was a bit nervous because I sent to several Yankees prospects, and it felt like right after I mailed them, each guy was promoted to the next level. I thought I was safe and a few weeks away from promotions, but a bunch of injuries sort of set the wheels in motion.

I sent to Dietrich Enns while he was in AA Trenton, and within a few days he had been called up to AAA Scranton/Wilkes-Barre. I was bummed, thinking I missed him at that level. Luckily, this came back yesterday: 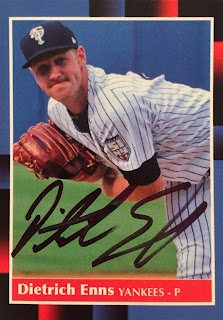 I must've jussst gotten it to him in time. I sent it to Trenton on 5/11, and by 5/15 he was making a start in Scranton. Luckily I live a few hours from Trenton, and I've found that if I send mail from Manhattan instead of my rinky dink NJ town, it gets there a little quicker. You might think this would be the opposite, but mail in NYC is pretty efficient. They can't let it pile up, so it comes in and goes out.

Either way, it's fun to live so close to most of the Yankee affiliates, as the expedited mail times really do help, as you see above. Also, I try to send to minor leaguers just before a homestand - just a tip for some of you newer TTMers.

I'm very excited to have this one back. Enns is a solid, yet underrated lefty pitching prospect. He has a 1.87 ERA in 83 career minor league games, 28 of which are starts. While he doesn't blow people away, guys just don't seem to hit him. He had a 0.61 ERA in 58 minor league innings last year. He consistently strikes out a batter per inning as well. He did undergo Tommy John Surgery a few years ago, but he's clearly come back as good as ever.

I'm looking forward to seeing him continue to climb the latter, and if he keeps pitching this well, he's definitely going to put himself in position for a spot start at some point later this summer.

Lastly, shout out to the Rookies App for the custom!
Posted by The Lost Collector at 8:55 AM