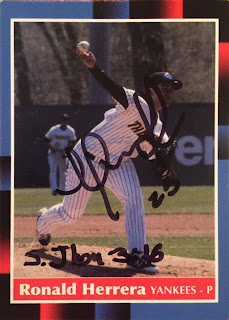 After 11 days, Yankees pitching prospect Ronald Herrera returned my Rookies App custom card signed. I'm excited to have this one back.

Herrera was acquired by the Yankees over the winter for spare part Jose Pirela. While not the sexiest of prospects, Herrera just turned 21 and has already logged 84 innings at AA, and even made a AAA spot start this season. He's well below the average age of AA, and just continues to advance despite not having the stuff of bigger pitching prospects. From what I read, he has good command and is very competitive. While he may never be a top of the rotation guy, he could end up being a use back of the rotation/spot starter/long relief guy as soon as next season. Still useful!

Regardless, the Yanks turned a guy that might have been released into an intriguing prospect. Not a bad gamble, and so far, it's paying off.
Posted by The Lost Collector at 7:00 AM