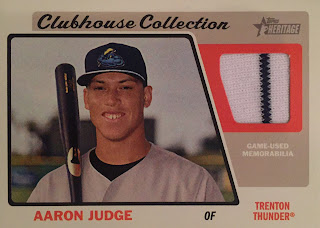 First off, I'll say that I don't believe calling up Aaron Judge will be the answer to the Yankees massive problems on offense.

I am conservative when it comes to calling up top prospects. I don't like to force the issue. Especially in NY, there is an added pressure to perform right away. When the team is 8-15 looking for a jolt of energy, that's too much to put on the shoulder of a kid making his debut, no matter who he is.

I do think Aaron Judge needs a chance at some point this year. Perhaps if the team falls too far out of it mid-season, he can come up and get his feet wet against Big League pitching. But not right now. He needs to bake a little longer.

With that being said, at some point, something has to happen to wake the Yankees up. And if it doesn't (and it might not), the team needs to trade at least one of their big relievers, maybe even two.

Dominant relievers are great, except when they rarely pitch with a lead. Teams will surely being paying high prices this June and July for top flight bullpen help. The Yanks would be wise to be honest with themselves and turn their assets into future assets if this season becomes a lost cause. They could have turned David Robertson into something very useful had they traded him a few years ago, but Cashman isn't allowed to do such rationale things.

It's only May 3, and hopefully the team turns it around enough to content, but it just doesn't feel like it's going to happen. It's a long season, and a winning May followed by a winning June, and they'll be ok. But it just feels like a lot to ask at this point.


Posted by The Lost Collector at 7:30 AM