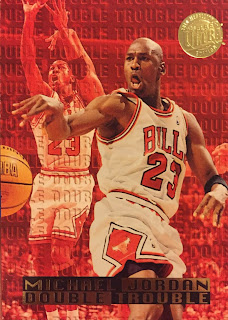 Lately, I've been thinking a lot about why I collect. I've also been gravitating toward cards from the '90s, when I was growing up. I'm sure it's rooted somewhere in keeping a piece of my childhood alive. You know, all that deep stuff buried within yourself.

I'm no psychologist, but I have an oddly weird time getting rid of cards from when I was a kid, even of other teams that have no meaning to me. I spent so much time with my cards, I can remember where and when I got so many of them. It's pretty crazy.

I still have a stack of Griffeys and Frank Thomas and Mike Piazza...cards that were tough for a 12-year old kid to pull. They used to "book" in Beckett for like $3 each. For some reason, it's tough for me to clear them out, even though I don't collect those guys. Plus, I could re-buy most of them for pennies if I ever wanted.

It's definitely some sort of sentimental sickness. May sickness is too strong a word, but you get what I'm saying.

Back when I was 12 or 13, we had just gotten AOL, and I started buying cards through collecting news forums. Usually it was a small deal where I'd send a buck or two in cash. A lot of the time, I'd send a dollar and a SASE for my card. My how times have changed.

There was one deal I made with another collector for a 700-card box full of Tino Martinez cards. I thought I was getting a steal, but I got duped pretty good. Sure the cards arrived as advertised, but it was basically like 100 1992 Fleer, 100 1992 Upper Deck, 100 1991 Donruss, etc. I don't know why I did it. I probably still have that box somewhere in my parents' attic.

I remember the exact three cards I sent for this box of Tinos.

I always regretted it. I know, dumb, right? But it stuck with me. So I bought the Jordan on eBay the other day for a couple bucks.

And I've asked Junior Junkie to see if he has dupes of the Griffeys. If not, I can probably get them for $4 total on COMC. They booked for a lot higher at the time.

I didn't need that Jordan. I don't collect him and rarely buy NBA cards. But I felt I needed to make it up to myself. It was 20 years ago, but obviously I haven't let it go. I'm not sure why, but I think I need to let go of a lot of my random cards of the past. So if you see a bunch of mid-90s cards popping up in my #SuperTraders packages, just know you're helping me get rid of cards I don't need anymore, and that it wasn't as easy to send them as it might appear.
Posted by The Lost Collector at 5:00 PM