I had fun posting about Jose Canseco cards last week. Yes, he barely played for the Yanks. Yes, his career is tainted due to admitted PED usage. But growing up, he was a big name with big power and was fun to watch. Any at bat could have led to a massive homer. So when the Yankees added him to their roster in 2000, it was awesome to see Jose Canseco put on the Pinstripes, even for just a short time. He even got an AB in the World Series as a pinch hitter.

After showing off two cards of his I found, I did a little searching and was surprised by how many sets he actually appeared in as a Yankee. On COMC alone, I count 23 different cards of him as a Yankee. Crazy! I want them all. 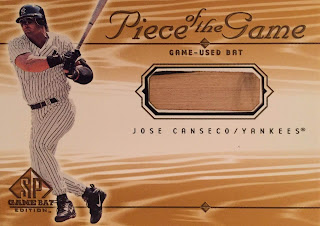 Well, I found this guy for a good price, so I had to. Fun fact, this set is the first Tino bat relic I ever owned as well. I thought the piece of bat was kind of cool too. I'm not sure what the dark stain is on the upper left. Then, there is some dark shading on the right. Interesting.

Now, I guess I am on a chase for Jose Canseco Yankee cards. I didn’t intend on this to be a mini PC, but I think it could be fun. I’m not going to go nuts, but maybe I’ll throw in a couple every time I make a COMC order.
Posted by The Lost Collector at 5:45 PM