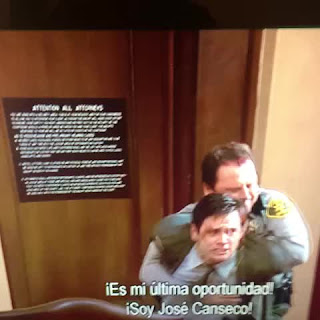 I've been undergoing a massive card organization project. Honestly, I sort of started without knowing where I'm going with it.

As a result, I have a massive box just filled with Yanks. Thousands of Yankees, completely unsorted. Oy. It's a headache.

It's mostly cards from around 1998-2016, all mashed up and blending together. But when flipping through the never ending stacks, sometimes a player or card sticks out. Sometimes it's both. 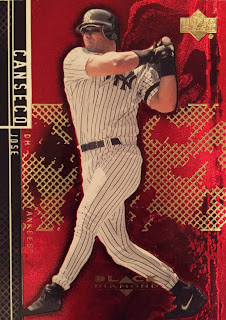 I probably only own about four or five different Jose Canseco Yankee cards, but man, the ones I do have are super cool. These two were located next to each other in one of my stacks, and they really just sort of stopped me dead in my tracks so that I could admire them. 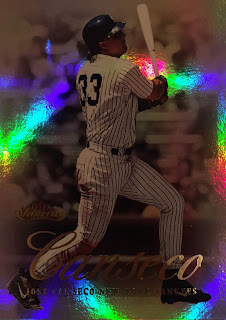 Shiny. Obscure. Loud. A perfect example of Jose Canseco's random tenure with the Yankees in 2000.

I still think it's pretty cool he spent a few months with the Yanks. I think they claimed him off waivers to block another team, and ended up getting him from the Rays. I remember watching live on TV when he did this:
For some reason, I've always loved cards of guys who barely spent any time with the Yanks. I'm not sure why, but I guess I find it cool when thei short-term stop is immortalized in cardboard.

If you come across any more Canseco Yankee cards, let me know. I'd be interested in trading for them!
Posted by The Lost Collector at 7:00 AM