Revisting my first TTM Success ever


I recently recovered a box of my old cards, and I was thrilled to find my first two TTM successes ever in there. These happened back in 1995, while I was in 5th grade.

I’m sure I read about through the mail autograph (TTM) collecting in one of the monthly card magazines, either Beckett or Tuff Stuff. I read them a lot as a kid. Once in a while there would be a quick feature on guys who sign or how to obtain autographs by writing to a player. I was intrigued, so I sent a few cards away.

I had no clue what I was doing. I know for a fact that I did not send a SASE. I’m sure I just wrote my name and address at the bottom of a letter, thinking the player would have no issue with writing out an envelope and sending my card back to me. Yet, somehow these two did return to me. I’m sure that wouldn’t fly in today’s world. 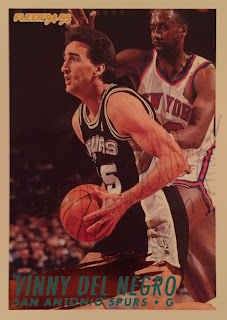 The first success was from Vinny Del Negro, then of the Spurs. I have no clue why I sent to him. He signed my 1994-95 Fleer card in pen. This set was pretty cool though. I like the foil pain splash behind the name. 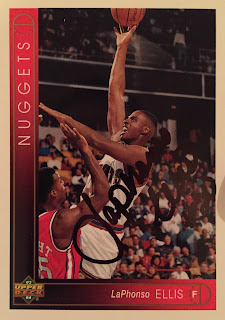 The second success was from LaPhonso Ellis of the Nuggets. I’m also positive I received some Nuggets stickers with the card, which was cool. It must’ve been obvious I was a kid. '93-'94 Upper Deck was pretty sweet too. Just basic, but nice.

I feel lucky to still have these. I’ve gotten hundreds of successes on and off and since then, and this started it all. You know what they say: you never forget your first…
Posted by The Lost Collector at 5:00 PM