Pitcher with a glass arm

Did any of you read those Matt Christopher sports novels growing up? "Novels" may be a bit of a stretch, but they were sports chapter books that were around a 4th or 5th grade reading level. I probably read most of them, even for sports I didn't particularly like or follow. 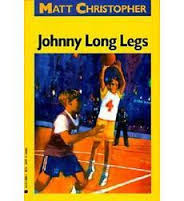 I remember a couple of my favorites were Johnny Long Legs, Catcher With A Glass Arm, and The Kid Who Only Hit Homers. There was also one called Ice Magic, where a couple of boys found an old electronic hockey game that ended up predicting their games. Good stuff! 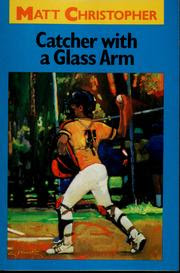 Catcher With a Glass Arm was about a boy named Jody who had the yips. He couldn't throw. He ends up being benched and feeling pretty down on himself. In a shocking turn of events, Jody has a chance to play later in the season and - SPOILER ALERT - leads his team to victory. 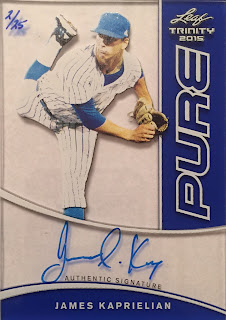 While Pitcher With a Glass Arm is probably better suited for my favorite prospect, Ty Hensley (who we just learned needs his second TJ surgery), I felt like it was fitting with the pickup of this Leaf Trinity Pure James Kaprielian auto, hand-numbered 02/25. As you can likely see, the card is made of GLASS. It's super thick too. I'm tempted to buy a cheap one of these - not of a Yankee! - to see if they actually shatter. I assume they do. Does anyone know? Has anyone ever dropped one?

Kaprielian has been shelved for the last few weeks with an elbow injury, although he is the prized pitching prospect in the Yankees system and they are being conservative with him. He is expected back at some point in June. Prior to the injury, he was as good as you'd expect for a polished college arm who was taken in the first round, going 2-1 with a 1.50 ERA an 22Ks in 18 innings at high-A Tampa. Hopefully he comes back healthy and ready to go, and sees time in Trenton this year.

Sadly, Ty Hensley will miss another season and some of next year with his second Tommy John Surgery. It's heartbreaking news for a kid who has been through so much. He has thrown just 42 professional innings since being drafted in 2012, and it doesn't look like he'll be on the bump again anytime soon. Still, he's a favorite of mine, and I'll always collect his cards. Here are two newer ones I just got in a recent shipment. 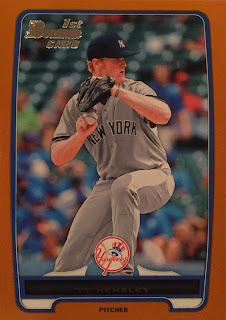 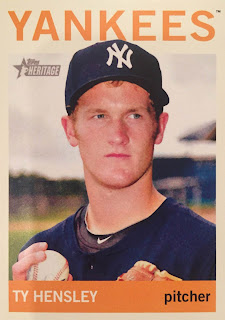