On my way home from work on Thursday, I stopped my Modell’s really quickly to see if they had 2011 Topps Heritage yet. They have a puny card display that is usually pretty empty. Lo and behold, they had Heritage - blasters, loose packs, and packs that came in cardboard packaging…but had the same number of cards as the loose packs (9). I don’t really get it. Based on other bloggers' reviews of the blasters, I should have just gotten a pack to see the cards, and been done with it. But I got greedy and bought a blaster. I know I’m due for a good hit soon…a relic or an auto, so I figured this would be it. Not true. Should have trusted my gut.

Now, I must say I really like the base cards. The card stock is great. The design from 1962 is cool, and the packaging is awesome. Love the green wrappers (1987 Topps anyone?), and I love the feel of the cards. Cardboard is good. The problem is, it’s boring opening these packs. Nothing shiny or off-colored sticks out. It really did feel like I was opening a pack of 1987’s with the 1962 design. It was just that boring. I guess I like inserts/parallels more than I thought I did. Have you ever bought a box or blaster, and about two packs in you know it wasn’t a good idea? That’s how this was. I did get some nice base cards, and I’ve highlighted each pack below. The odds of SPs are 1:3, and I got three (woohoo, beat the odds) but they don’t feel very special. I did manage to get two inserts – a Harmon Killebrew Flashback and a Ramon Hernandez Chrome #'d to 1962. Both are completely available for trade. 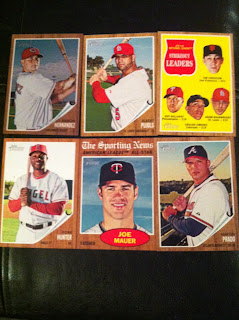 On a side note - is this set sponsored by Nike? I feel like every other player has the swoosh in a very prominent place. 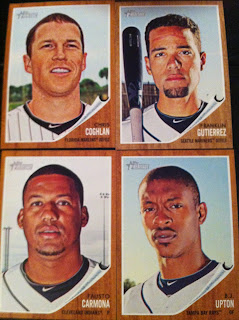 I also managed to get three Yankees and a couple Babe Ruths. The Yanks I got were Teixeira, Pettitte, and Hughes. I’d like to get the rest of them (especially the Russell Martin – I like cards of new acquisitions), but probably won’t be buying any more packs.

Snoozefest so far. This box was a bad idea.

There it is. Overall, a massive waste of $21. Glad to trade any of these away, just let me know what you need!
Posted by The Lost Collector at 7:00 PM