Trade Review: No Relics Pulled (I have the same problem)

A few weeks back, Dustin from No Relics Pulled reached out about a trade. He collects a few different players/teams which makes him a very easy trading partner. He has a Johnny Damon PC, so he figured as a Yankee collector I might have some Damon dupes laying around. I wish I did! While looking through my collection, I was surprised by how few Damon cards I had at all, let alone dupes! In a recent trade, I had just received a Damon Bowman foil, and while I liked the card a lot, I figured someone who collects Damon would like it even more. So I sent that Dustin, along with a King Felix 2010 Bowman Chrome Refractor and a few Tigers I had laying around.

Dustin sent me a really nice assortment of Yanks, including a Robinson Cano 2011 Topps Purple Diamond card. This is my first of any of the Diamond cards - red, blue, or purple! It's a really cool card, and I believe it was exclusive to Toys R Us. He also sent me a Teixeria and Whitey Ford '09 Goodwin Champs, and a few other Yanks. I'm glad to get the 2010 Topps Michael Dunn RC again, as the only other one I had I used for TTM, although it did come back signed. The Swisher Upper Deck card is pretty cool as well, as this was after UD lost their license. They did a good job hiding the logos in this card, although overall it's something they struggled with. The Jeter and Mo checklist in the picture clearing shows the interlocking NY on their caps. 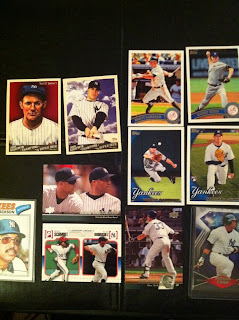 Dustin - thanks for the trade! Looking forward to trading again.
Posted by The Lost Collector at 1:30 PM