Baseball Dad (Jack) of All Tribe Baseball sent me a note about swapping some Yanks for Indians. I'm always down for a team trade, and the Indians are one of the teams I'm not currently depleted of, so we agreed to a swap. I had some newer stuff, as well as some Indians from the late 1990s and early 2000's. I also had a few Pinnacle Inside cards that Jack collects. Overall, nothing too special, but still some cool cards from some forgotten sets.

In return, Jack sent me a huge lot of Yanks - over 50 cards, including 7 Tino's - 5 of which I definitely needed. My favorite one was the 1998 Metal Universe. First off, I have no idea how I didn't have this one. I have almost every Tino Yankees base card. Upon closer inspection, this card has a picture of St. Patrick's Cathedral in the background. How freakin' cool is that?! Also there were a few cards from the lost years - Tino's time with the Cards and Rays. 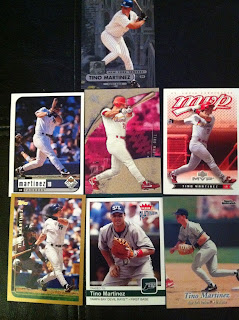 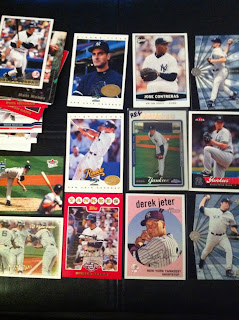 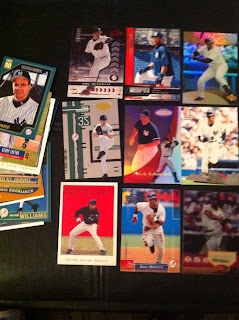 Jack, hopefully we can trade again soon. Thanks!
Posted by The Lost Collector at 7:00 PM