I feel like all of my posts lately are either trade reviews, purchase reviews, or TTMs. They are mainly baseball-centric as well. This is all well and good, but I'm not bringing much insight to the table other than telling you what I got in the mail that day. Boring. I recently saw a post over at Community Gum about a trade for some Garbage Pail Kids cards. Man, I remember those! It got me thinking about some other non-baseball, basketball, football or hockey cards I've collected in the past. There have been a lot of attempts at trading cards - movies, TV shows, other sports - so here are a few that I remember collecting. I'd love to hear what you guys collected at one time or another.

In 1994, all the rage was about the World Cup in the USA, and rightfully so. I remember getting a few packs of soccer cards made by Upper Deck. I loved the Tony Meola (USA goalie) base card, as well as hologram (!!) insert of Roberto Baggio and Jorge Campos. Do these ring a bell?

I was also a big collector of GI Joe's when I was growing up. Actually, screw the term "collector." I played with them and had wars. I was always jealous of the kids on the commercials who had a battlefield in their backyards. I had A LOT of action figures (the small, movable ones), and it terrifies me to know what my mom may have sold them for in a garage sale. My favorite was Big Boa (the one with the boxing gloves and punching bag), and I also liked Croc Master (he came with a pet croc). Those two were IMPOSSIBLE to find, but somehow my parents came through for me. Imagine having to find those figures in the late '80s without the help of eBay?! I also remember collecting some of the cards. The ones I collected were from the 1991 set.

Lastly, I remember getting a few packs of racing cards before they became mainstream. Nowadays they have a lot of really nice products with race-used fire suits and tires relic cards. I remember these packs of 1991 Maxx used to cost $.25 at a local drugstore, and I was a pretty big Dale Earnhardt Sr fan growing up, so I liked these a lot. 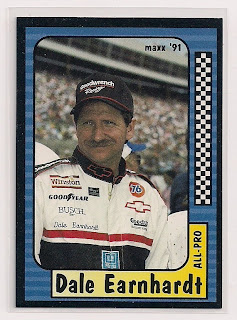 I'm sure I collected other random cards, but these three sets really stick out to me. I recall a few packs of Ninja Turtle and Dick Tracy cards. What about you guys? What did you collect that wasn't "mainstream"?
Posted by The Lost Collector at 6:00 PM