TTM Success: The greatest closer of all time

No, not Trevor Hoffman, king of compiling saves on bad teams. I'm talking Enter Sandman. Mariano Rivera signed my 2011 Topps for my project. I was really happy to get this back, as I figured I was going to have to wait for Series Two to cross off 2011. His signature looks great. You can tell he signs with the care and precision that he pitches with. I mailed it right before pitchers and catchers arrived, and I saw a bunch of people getting responses from Mo in a lot quicker turnaround times. So I sent him another 2011 to take a chance, and of course that day mine comes back. I feel a little bad about this, so if my other one comes back, perhaps I'll hold a contest or send it to another Yankees fan.

I also got to cross 2001 off my list with a success from Clay Bellinger. Clay grew up about an hour away from where I grew up, so he was always a popular subject with the local paper. He played a bunch of positions for the Yanks in a super-utility type role. Most recently, he coached his son's team in the Little League World Series. 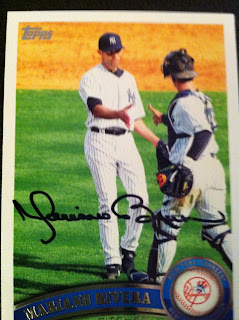 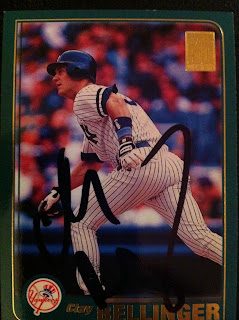