As I mentioned in a previous post, I picked up a second card on my Holy Grail list. This time, I grabbed a really nice 1967 Topps Whitey Ford off of eBay for less than $4 - shipped! I believe it’s Whitey’s last year of being included in the Topps base set before he retired, so it’s got a long, long list of stats on the back. And well, he was really good.

I wanted to add a card of his for several reasons. There are a bunch of guys who played for the Yanks prior to 1970 who fall within a certain group…Ruth, Gehrig, DiMaggio, Mantle, Maris, Berra, Rizzuto, etc. I think most Yankee fans would put Whitey in this category, so owning his card is pretty special for me. Plus, he pitched for my hometown Binghamton Triplets (now the Mets) while in the minors. 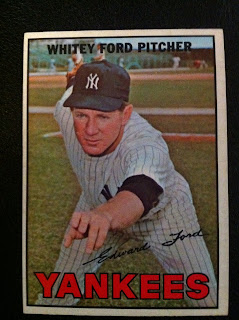 Outside of light corner wear and off-centering, this card is in great condition. After adding the 1960 Berra, this card is definitely one of my new favorites. Two down, seven to go! I do want to eventually replace these cards on my list and always keep a Top 10 most wanted. I’m thinking that the next two might be a 1949 Bowman (or some other older card) and a Billy Martin Topps Yankees base card (as a player).
Posted by The Lost Collector at 8:00 AM