I don't generally trade away or trade for TTM/in-person autographs. I have my collection of my personal TTMs, but that's about as far as it goes. However, this is my second trade in two weeks for such autographs. I don't envision this becoming a regularity, but I like helping fellow collectors out if I can. As you may have read, last week I traded with Paul's Random Baseball Stuff - a Corey Lidle auto he needed for a Sparky Lyle I didn't have.

In my second deal, there was a collector over at www.sweetspotgraphs.com looking for a Vlad auto. I had an extra from a TTM success a few years ago, and he offered to send me an extra Josh Hamilton that he had. I know that Hamilton signs TTM - usually takes about a year - so I figured this would be an easier way to add him to my collection. I was at the 2008 HR Derby in old Yankee Stadium, and I've always been a big fan of him for that, as well as his story and the obstacles he has overcome.

This Hamilton is a sweet looking sig on a 2010 Topps. It was a blind trade, and for whatever reason I was expecting an older, so I was pleasantly surprised that this was a 2010 Topps base card. It looks great and is a solid addition to my collection. I sent a Topps base card of Vlad - I think it was a 2001 - so hopefully the other collector is just as happy with his card as well. 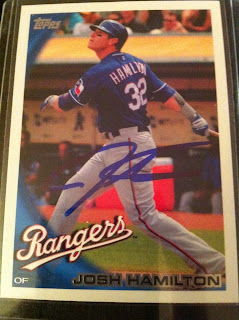 Posted by The Lost Collector at 2:00 PM