A week or so ago, I posted some game used trade bait. San Jose Fuji saw two cards to his liking - a Trevor Cahill 2011 Topps manupatch and a Dale Murphy jersey card. In return, Fuji sent me two Yanks game-used cards - a Randy Johnson (swatch is actually Diamondbacks) and a Bernie Williams. I had a Bernie bat relic, but not a jersey, so this was a very welcome addition. 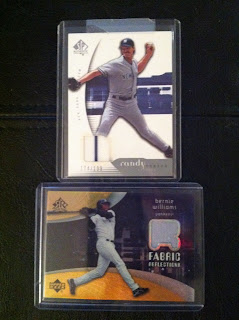 In addition, Fuji also sent me a sweet auto...of himself! This 2008 Topps was sandwiched between the two game used cards. Hopefully next time we make a deal, I'll get a Fuji game-used card! 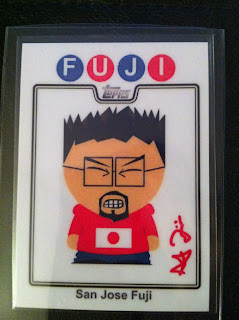 Thanks again, Fuji!
Posted by The Lost Collector at 7:00 PM