A Piece of the World Series - O'Neill and Maddux

I love the 2000 UD HoloGRFX A Piece of the Series set. For those of you who haven't seen it, it's an 11 card insert set featuring a piece of a game used base from the 1999 World Series. The first card I got in this set was the Tino Martinez. I had wanted that card from the moment I saw it, and I liked it so much, I've decided to try and collect the set.

Now, 11 cards seems odd for a set, no? That's because John Rocker was originally on the 12-card checklist. And then we went crazy and UD pulled him from the set, rather than replace him. A few weeks ago, I picked up the Chipper card, and I'm proud to add two more of these cards to my collection, both courtesy of my eBay addiction.

First up is Paul O'Neill. Paulie only hit .200 in this World Series, but contributed 4 RBIs, including two in Game One. I got this card for just under $3, with another $3 for shipping. 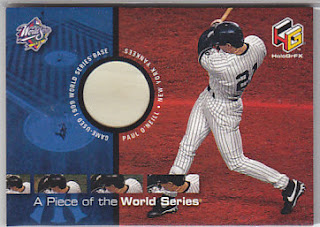 Next up is my second Brave in the set. One of the best pitchers to ever take the mound, Greg Maddux. It's hard to believe that Atlanta only won one World Series with their great pitching staffs. Anyhow, Maddux got the ball for Game One, and went 7+ innings - giving up four runs (two earned) and striking out five. It wasn't quite vintage Maddux, but he was still pretty damn good. The problem was, El Duque was better, going 7 innings, only letting up one run on one hit (a Chipper homer) while striking out 10. I got this Maddux card for $6.54 plus $3 shipping. A little more than I wanted to spend, but the opportunity was there so I pounced. 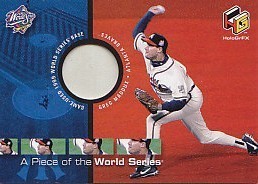 Four cards down, seven to go in this set.
Posted by The Lost Collector at 1:30 PM