A few weeks ago, I pulled a Robinson Cano 2011 Topps 60 Jersey relic. It really wet my appetite for more Yankees game used cards. I like the Topps 60 relics, so I started my search there and found a few others along the way.

The first card I nabbed was this Phil Hughes 2011 Topps 60 Relic. I want to try and collect all the Yanks in this set, so I bought this Hughes as a starting point, and I have Joba on the way. Part of me wishes I could have found a Hughes home jersey with a pinstripe, but pretty much every Topps 60 I found of his was an away jersey. Anyways, I got it for $1.79 (plus $2 shipping). 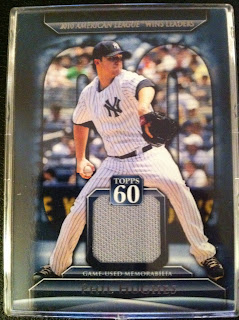 Next up, a sweet relic of Mike Mussina from 2008 Topps. This card is still in the shrink wrap, so I assume it came in a box of some sort. The Pinstripe looks awesome...usually they are vertical on jersey cards but this one is horizontal. I think most of the game used Yankees that I go after should have a Pinstripe. I paid $1.99 for this (plus $1.50 shipping). It could have gotten out of hand from there, as I had won a Giambi and Joba relic as well, so I've put myself in a time out and suspended my purchasing power on eBay for the time being. I could have dropped a lot more money. 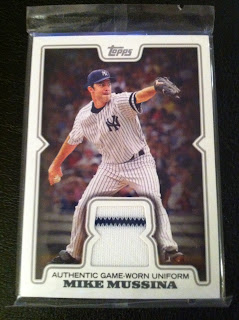 Last but not least, I picked up this Tino 1999 Pacific Paramount Holo-Gold (which is written in silver...weird). I didn't love this card when I saw it, but it was #'d/199, so I figured the buck was worth it. 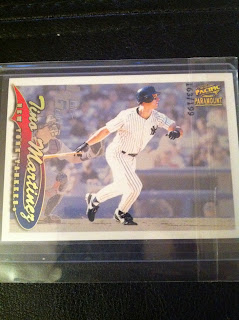 I have a few more relics on the way in the mail. I'm quickly becoming a game used addict and it's starting to worry me. This could get out of hand. One card I bought was part of a lot which included a few other teams, so I may very well have some good trade bait in the near future.
Posted by The Lost Collector at 8:00 AM