I recently picked up my second Slade Heathcott card, this time a 2010 Bowman Platinum rookie card. Heathcott was the Yankees 2009 1st round draft pick. He is a toolsy outfielder that projects well. As a 19 year old in A ball at Charleston, he hit .258 and swiped 15 bases. However, despite the low average and high strikeouts, he showed a great ability to get on base at a .359 clip. Not bad for a 19 year old in his first full pro season. I'd love to see him take a leap this year - pick up the BA and OPS while striking out less and showing a little more power. I assume he'll head back to Charleston to start the season, but he could definitely find his way to High A Tampa pretty quickly. 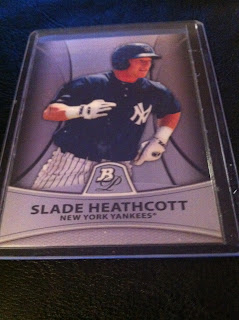 Posted by The Lost Collector at 9:00 AM