Adam of Thoughts and Sox and I ignored the unwritten rule of trading within your division as we did a small Red Sox for Yanks swap. Granted, this was in baseball cards and not actual players. Correct me if I'm wrong, but I think the last actual Boston-NY trade was the Mike Stanley deal in 1997. Anyways, Adam claimed the 2011 Topps Opening Day Red Sox cards that I posted, and I threw in a few others. In turn, he sent me a few Yanks.

I really like the 2004 Donruss Classics cards he sent me. The Mariano Rivera is awesome...it would look great signed. He also sent a few shiny cards - some 2004 Donruss Elite Extra Editions and a 2005 Zenith Carl Pavano. Despite it being Pavano, it's a really nice looking card. 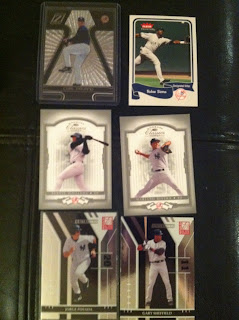 Thanks, Adam! I'll keep you in mind as I get more Red Sox cards in the future, as I'll want them out of my house immediately.
Posted by The Lost Collector at 1:30 PM